Bas-relief is a type of relief (sculpture) that has less depth to the faces and figures than they actually have, when measured proportionately (to scale). This technique retains the natural contours of the figures, and allows the work to be viewed from many angles without distortion of the figures themselves. There is a continuum of the bas-relief technique into the next category, altorilievo (it), or high relief. That technique combines the rounded figures with significantly deeper background...

Bas relief is needed to CNC carve most 3D scenes, as the available (Z) depth of the CNC process is much less than the depth used in most 3D models. Coins are a good example of bas relief images.

A simple, ie proportional, scaling does not work well; most of the detail is lost.

Instead, a non-linear projection should be used. Typically these projections emphasize changes-in-depth, rather than absolute depth. Emphasizing this part of the depth data appears to trick, or allow, the human brain to infer the original depth information, making bas reliefs look more recognizable and “realistic”.

There are commercial programs that will do these projections, for example ArtCam and Vectric Aspire. They are costly.

BlenderCAM, free, has the ability to generate bas reliefs. The process is not straight forward.

There are several research papers and a few scripts out there as well.

In most cases the process steps are:

This projects goals are:

BlenderCAM is alive and well!

It has been updated to work with the new Blender 2.8, which is a lot easier to use than previous versions.

The bas relief plugin hadn’t been updated, but I managed to tweak it so that it appears to be working.

I have an upcoming project to create a commemorative medal, and a bas relief carving will be a good fix.

So after several days of experimenting I’ve got a process that generates meshes from regular images: 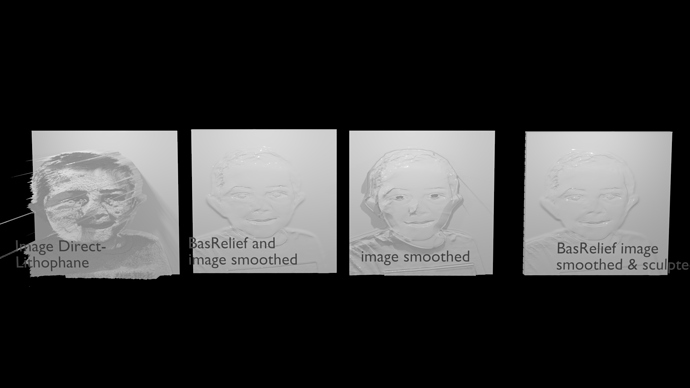 Although the bas relief add-on is designed to work with depth maps generated from 3D geometry, as it is doing an analysis that highlights the changes (differentials) between heights, but maintain “plains”, it also works surprisingly well on standard pictures!

The image on the left is the raw JPEG (after background removal) applied as a depth map on a plane. Looks great as a lithophane, but the elevations are ragged, disconnected, and not at all pleasing as a carving.

A smoothed version, with the colour range crushed to a small range is better, but also has some unacceptable ridges and valleys (not easy to see in the rendering above.)

The two images that were filtered, feed to the bas relief add-on, and then given some more basic editing, really look like an engraving you’d find on a coin!

Aside: Some hints on how to generate depth maps from 3D geometry- https://blender.stackexchange.com/questions/56172/bas-relief-model-from-a-3d-model-scene/56224.

NOTE: in the process below, do each step as a duplicated new layer in Gimp!

The process I came up with was:

You can export to EXR and update in Blender to see the effects.

Final tweaks are quicker/easier to do with Blender’s sculpting tools.

Also tried this amazing AI: 3D Face Reconstruction from a Single Image. The generated mesh doesn’t have enough points to be used as input to the bas relief. With smoothing/tweaking it works, but is to indistinct to easily identify the person- which makes sense give how it works!